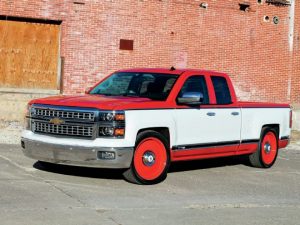 When the world of custom vehicles and performance vehicles collide, you get a pretty awesome mix of form and function. Not only do they look good rolling, but they can make the rolling function fun. In this world of custom vehicles that can perform much better than stock, the name Chuck Mallett from Cornelius, North Carolina, is one that stands out. Chuck was raised in the performance world since his father raced for Ford in the ’60s and ’70s, so high-octane fuel was in his blood from an early age. This type of upbringing either makes you hate the automotive world or love it. In Chuck’s case, the love for it is what has kept him building custom vehicles for the past 40 years. He has spent a lot of that time doing some pretty crazy performance work. Being the owner of Mallett Cars, which specializes in GM performance upgrades, this keeps him busy filling everyone’s requests for more power. He even offers a Hammer Package on the new C7 Corvettes that you can get straight from the dealership. With numerous magazine features and covers under his belt and a handful of past SEMA vehicles, when it came time for the 2014 SEMA Show, Chuck knew it was a perfect time to jump on the huge truck market that was taking over the show and build one with his own flare. He contacted General Motors and ordered a ’14 Silverado 1500 Z71 4WD double cab in factory red. Chuck wanted to build a lowered truck but the only way he could get the larger Silverado motor, the 6.2L V-8, was to get a 4WD version. This was not a problem for him since he can fabricate needed parts in-house at his shop. He knew that he wanted a ’70s-themed truck with this build. One that would have the classic two-toned look combined with today’s luxury and performance. 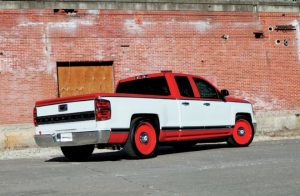 Getting this 4WD to sit lower was somewhat of an issue at first, as no one made a lowering kit for the new body style 4WD, and he couldn’t start with a 2WD version. He took a McGaughys 2WD front drop kit and machined it to fit the 4WD truck. Knowing he wanted to do a retro-looking wheel to complement the look he was going for, a set of 22-inch Centerline Smoothie wheels that were painted red to match the truck and wrapped in 285/40/22 Yokohama tires. A set of ’55/’56 Chevy repo hubcaps were machined by Bob Temple to fit the new wheels and were mounted on custom tabs. While under the truck, the entire frame was cleaned and sprayed with Dupli-Color bedliner. 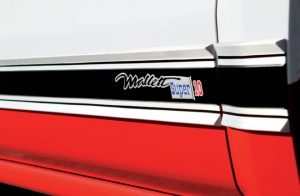 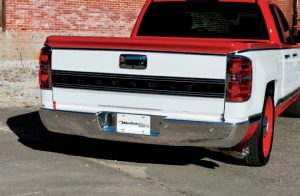 Now that the truck sat where Chuck was happy and the rolling chassis was ready to go, it was on to the body. The first thing to go was the plastic caps on top of all the bedrails and the top of the tailgate. Jim Callaro at Metal Masters in Mooresville, North Carolina, welded in metal replacements for the plastic panels. This gave the bed a smoother look and allowed the paint to carry over the top of the bed. Chuck and Jim teamed up on the front and rear bumpers as well to completely rebuild them to remove all plastic pieces and make them match the look of a ’70s Chevy. There are over 200 hours in custom fabrication in both of the bumpers. Then, Sun Stoppers Chrome Wrap and Window Tint in Cornelius, North Carolina, wrapped both bumpers in chrome. To continue the theme, Chuck and Jim built custom side trim moldings to resemble the old Chevys. They used 3003 sheer aluminum that was bent on a break, welded and hand-filed to perfectly mimic the ones from 1972. Then, they were masked off and a black center was sprayed to complete the look. For the tailgate, a retro “Chevrolet” center plate was made. Soon, the truck was off to Lake Norman Paint & Body in Cornelius, North Carolina, where Mike Pelusi painted the center of the truck PPG Summit White and painted over the new bodywork on the bed, finalizing that ’70s look. Once back from paint, final touches like the custom egg crate grille insert made from welded aluminum plate and the chrome bezel taillights from Razor Auto were bolted on. 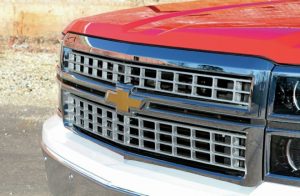 With a fully modern/retro exterior, Chuck knew he had to bring that same look into the interior as well. The factory black leather seats and door panels received houndstooth inserts, thanks to Robert McCarter in Harrisburg, North Carolina, which screams early ’70s Chevy. All of the dash and door trim pieces were sprayed chrome to complete the retro look. 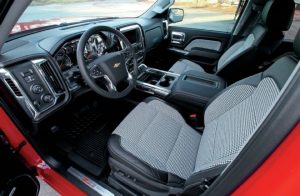 Last but not least was where Chuck got to shine on this build, the performance add-ons. Starting with the factory 6.2L V-8 engine, the block was fully race prepped, balanced, and blueprinted and a Callies billet crankshaft, 6.152 Ultra I-beam billet rods, Wiseco Gen 5 LT1 10:1 pistons and JGK 4.065 rings make the bottom end of an already beefy engine now bulletproof. A COMP Cams custom cam was ordered to allow better fuel flow. The motor was ported by Advanced Induction/Cylinder Head Development in Concord, North Carolina. ARP head stud kit and wrinkle black valve covers wrap up the top end of the motor. To spit out the spent exhaust gases, a set of Kooks long-tube headers and a complete Kooks 6.2L cat-back 3-inch exhaust with custom tips were bolted on. This is where most people would stop, but not Chuck. He also added a Whipple 3.0L supercharger with 13 pounds of boost along with a custom ECM tune that he did in house. A set of Accel Extreme 9000 Ceramic plug wires round out the performance additions. A 6L80/6L90 was built by RevMax in Charlotte, North Carolina, to get all that power to the ground. Speaking of power, with all the internal upgrades along with the blower and new exhaust, this truck puts down right at 800 hp to the rear wheels! 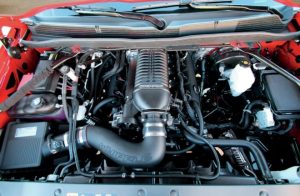 What is a Core Charge?

What is a Core Charge? A “Core Charge” is similar to the deposit you might pay for a can or bottle of soda. In many states, to promote recycling, you are charged a deposit when you purchase a can of soda and you receive your deposit back when you return the empty can. Many automotive parts have a Core Charge, or Core Price, that works the same way as a soda can deposit. Here’s how the Core Charge works: To receive your Core Charge refund, you can do either of the following: Please see our Returns policy for more information on returning a core item. Core Charges are often mandated by state legislature, and, as such, the actual core charge and taxes on the charge may vary depending on the state in which you buy your part.
Close