If you know anything about cars, you know that an engine is connected to the transmission by way of a clutch. Without a clutch, a vehicle would stall every time it comes to a complete stop. However, vehicles with an automatic transmission do not have a clutch. Instead, they use a torque converter. 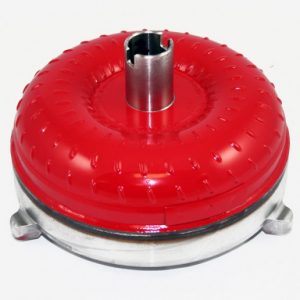 Torque converters were originally created as an option in luxury cars in the late 1940′s. Originally introduced in the 1948 Buick’s 2-speed Dyna Flow Transmission, it allowed cars to become fully-automatic. Since then, a lot of research and design has aided in the evolution of the torque converter. Today, performance torque converters, like the ones carried by RevMax, deliver remarkable results by increasing your overall acceleration and fuel economy.

A torque converter serves two purposes. It serves as an automatic clutch, and it multiplies torque while the vehicle is accelerating. What makes torque converters unique is the transfer of power from the engine to the transmission with fluid being the only connecting factor. 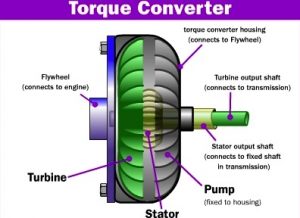 Along with preventing engine stall, the torque converter also improves performance by nearly doubling the torque of the engine, which improves acceleration. Since it uses only liquid to transfer power, it is smooth and free from severe shocks that are sometimes found with standard transmissions and clutches. Torque converters like RevMax’s 4L60E LSX Stage 5 2600 Stall Torque Converter can create enough acceleration and torque to send in the back of your seat.

Inside the Torque Converter

A torque converter is made up of four components, which are all stored inside the housing. The housing unit is mounted on the engine’s flywheel and turns at the same speed of the engine. Together, the four components make a hydrodynamic unit that transfers power through the dynamic motion of fluid.

Torque converters have a big job and have a crucial influence on the performance of your car or truck. RevMax Performance Torque Converters are built with your car’s performance in mind. We can multiply the torque of your engine by two to three times!

To learn more about RevMax performance torque converters, please visit our online store. In a sport where success is measured by a thousandth of a second, RevMax Performance Converters can take your car from zero to hero!